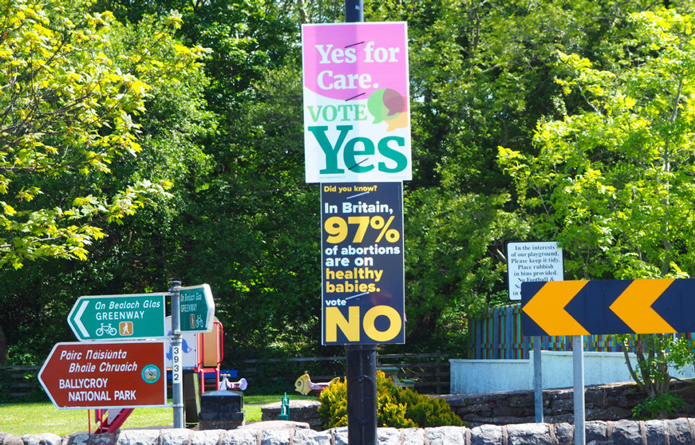 Our posts are both written in french and english. English version is below this article. 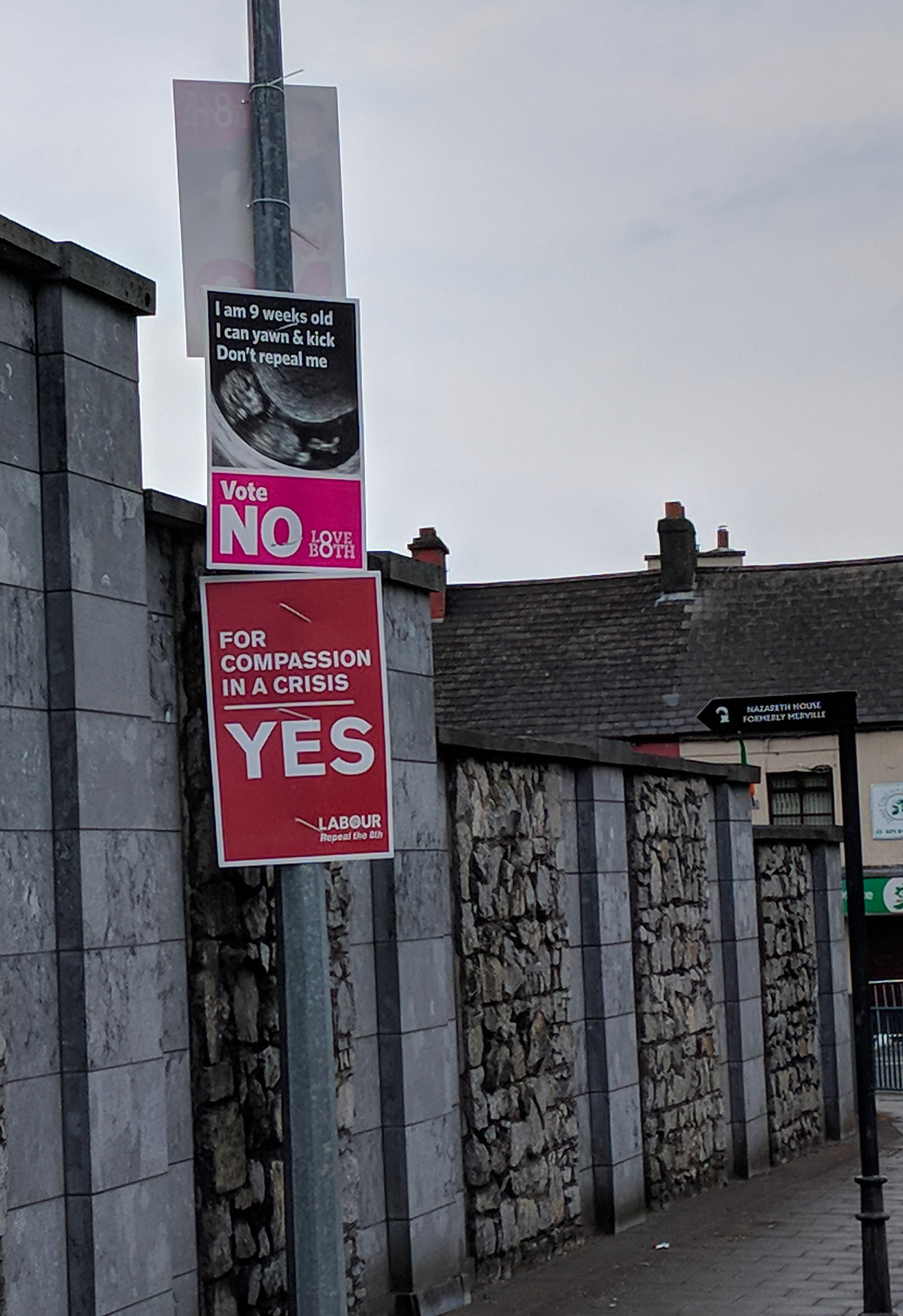 Information on Irish politics and rights of Irish citizens :

Information on reproductive health as understood by the World Health Organization :

Nota Bene : « Health is defined as a state of complete physical, mental and social well-being and not merely the absence of disease or infirmity. Reproductive health implies that people are able to have a responsible, satisfying and safe sex life and that they have the capability to reproduce and the freedom to decide if, when and how often to do so. »

On Trump’s administration position regarding abortion :

ABOUT IRELAND REFERENDUM – WHEN THE ROAD BECOMES A POLITICAL FIELD

When we made it to Ireland, we also discovered that the road had turned into a political ring, with « Yes » and « No » (or « Nil » and « Ta » as they say here) placards tide to the lamps and on the bridges. We had entered a country that had set the date for its next referendum on the 25th May.

A look back upon a past of interdiction

Since the 1983 referendum, the 8th Amendment was added to the Irish Constitution, for the rights of the mother and the unborn child. As of today, Ireland turns out to be considered as a country in which it is not possible to abort on demand, this being punished by a 14-year jail sentence. After a few cases that were highly broadcasted by the media, the law slowly changed, broadening the reasons under which abortion could be allowed – among which cases the X-case of a teenage girl who became pregnant after a rape in 1992, and more recently in 2012, the death of a young lady who died of a septicaemia, not being able to abort after consequences of a miscarriage.

Nowadays, abortion is only allowed when the life of the mother in endangered, including mental disorder and suicidal risk. Still, the abortion is not recognized as a fundamental right for Irish women. The UN and the Human Council already notified the country of their restrictive law and the population brought the issue in front of international institutions.

Overview of politics on abortion in Europe
Most European countries allow abortion up to 12-weeks on demand. The United Kingdom turns out to be the country offering the longest period of termination of pregnancy up to 24 weeks, under the condition of an agreement between two practitioners. It is followed by the Netherlands allowing up to 22 weeks and Sweden up to 18 weeks. Cyprus and Poland are on the list of countries allowing abortion for medical reasons but not on demand. Malta is the most restrictive on the issue of legal abortion, not even allowing it in cases where mental and physical health is at stake.

A reproductive health and social issue

In countries with restrictive laws, unsafe abortions, following unwanted pregnancy are more common: a human and economic cost that derives from the deaths and/or potentials treatments required if any complications were to unfold. Unsafe abortions were estimated at approximately 25 million by the World Health Organisation (WHO) between 2010 and 2014, according to a study led with the Guttmacher Institute. An abortion is considered to be safe when practised under the supervision of a health professional, in conditions guaranteeing the safety of the women, following guidelines and standards defined by the WHO. The study clearly outlines the correlation between unsafe abortions and restrictive laws.

From a democratic perspective

An interesting angle relies in the simple fact of a referendum in taking such a decision. The Irish constitution actually defines that any constitutional modification must be accepted through a popular referendum. Which is not the case of all democratic countries. As a matter of fact, in France, a constitutional revision can be implemented as long as it has been accepted by the Congress – reunion of the National Assembly and the Senate – and gathered a 3/5 majority of votes. The reform will not be submitted to the people and the confidence is set mostly in the hands of those that were elected in the previous elections.

Irish citizens are questioned on matters outside of « normal » elections times.. A referendum on a simple question enables to at least ask your people whether or not they are in favour of one matter, on the contrary to elections that deal with various topics.

The Irish constitution requires to organize a referendum whenever a revision should be brought to the Constitution. 35 referendums were held since 1939, which means only 2 years after the constitution was written in 1937. It represents nearly one referendum unfolding every two years. This was the case for previous European treaties to be ratified, but also for gay marriage in 2015 – a referendum that revealed a 62% turnout and more than 60% in favour, sign of a decreased influence of the catholic Church on Irish society.

What is interesting in a referendum is to see whether or not the Irish people will seize the opportunity to change the constitution. With new demands of inscription on voters’ lists, up to 125,000 according to some medias, and a 64% turnout, the figures do spoke for themselves. Irish people wanted to have a word to say on this matter.

Also, on this Friday 25th May, Ireland chose to potentially divide its people around a Manichean debate – it was « Yes » or « No » no other option. The issue of abortion brought up urgent matters among which women’s rights and civil rights; some issues that are supposed to unite a nation, not divide it. Organizing a referendum is a way that might lead up to disagreement and that might lead to a division within the society. With 66% of the votes in favour, the figures show an important majority, but also hides the fact that non-voters are ignored from communicated figures, and that a part of the population was still against those changes.

Irish voices to speak up and send the right message

The vote made history and Ireland made a great step forward on the 25th May 2018, in times when other countries are not moving in the same direction and even seem to make a few steps backwards. Trump’s administration recently announced a potential legislation to withdraw any subsidies from « Title-X » institutions, involved in Planned parenthood and health centers that help women with information on STIs, contraception and abortion procedures if required. This « gag-rule » was already discussed under Reagan’s administration, but never implemented, and even said to overcome executive power.

Still, the Irish referendum does not immediately legalize abortion. It signifies the beginning of debates on modifying legislation. It seems that what is under discussion concerns a 12-week delay and a 3-day cooling off period. Allowing abortion up to 24 weeks will depend on the consequences on mother’s and the child’s health. In addition, limiting unwanted pregnancies is also at stake and will have to be linked to more sexual education and access to contraception for young women. Let see how Ireland will keep on going in the pat it opened door for.